Home » Blog » FAQs about wasps (and hornets) and their nests

FAQs about wasps (and hornets) and their nests

Wasps and hornets are a large part of our work, particularly in the summer months and we often get the same questions, so here are the answers to some of the frequently asked questions and wasps and their nests.

How long does a wasp nest last? 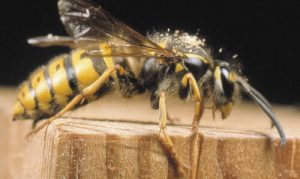 The length of time a wasp nests last very much depends on the weather in a specific year. Usually they will last from April/May all the way through to October/November.

Wasps begin building their nests when the queen comes out of hibernation in the spring (usually April/May in the UK), as the weather starts to get warmer. The queen starts her nest from scratch at this point, so the nests are very small, and you are unlikely to notice them.

As the temperatures rise over the summer, the nest grows and the so does the population. They usually reach their peak activity around August and September. The nest dies off as the temperatures drop in autumn. If it is a particularly mild year, they may even last into December!

Where can they build their nests?

Wasps are very well adapted and are able to construct nest in a large range of habitats. Examples of nest locations include:

When do wasps die?

The worker wasps will start to die as the temperature starts to fall in the autumn. Usually the nests will die in October or November, but we have treated nest in December before if when the weather has been particularly mild. The only wasps that do not die over the winter are the queen wasps, as they go into hibernation.

Can wasps return to the same nest?

The short answer is – no. Once the wasp season has finished in October/November, the worker wasps will die and only the new queens will survive the winter. In the spring, the queen wasps will come out of hibernation and start to build brand new nests. However, this does not mean that a queen wasp won’t decide to build a nest in a similar area. We have seen cases of nests being built directly next to old nests!

What to do about a wasp nest?

Whilst the nest itself is not dangerous, it is what lies within the nest that can pose serious health risks. If the nest is dead and there are no wasps present, it is perfectly fine to leave the nest in situ as it does not pose any risk. However, at their peak, wasps’ nest can have on average 3,000 – 6,000 adults present. Reactions to wasp stings vary massively and, in some cases, a single sting can lead to anaphylaxis, hospitalisation and even death if not treated quickly. For this reason, we would never recommend treating a wasp nest yourself with amateur products. At Pest Solution we have the specialist equipment and protective clothing to treat wasps nests in a safe and effective way.

If you think you may have a wasp nest and would like more information, contact us here.